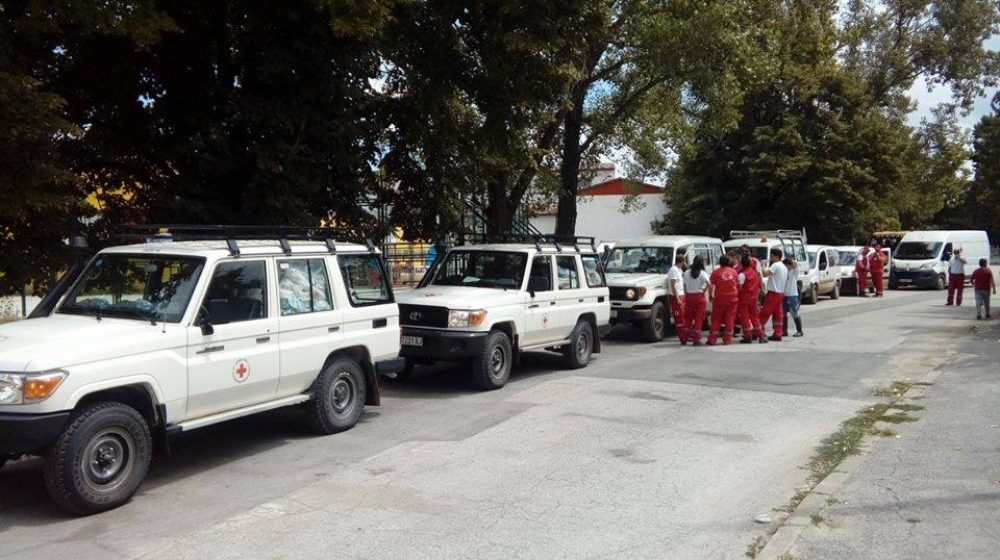 During the past few days Macedonian Red Cross teams have been included in support activities of the affected population from the floods in Skopje and there was distribution of humanitarian relief consisted of 17.662 food parcels (1 parcel for a family 4 members), 15.000 daily meals, 7.600 hot meals, 3.369 l milk, 7.172 l yogurt, 2.025 hygiene parcels, 128 tons of drinking water, 630 packs of diapers, 550 mattresses, 2.154 blankets, 600 kg of clothes, 286 pair of boots, 252l disentail. Also to 92 persons there was administered first aid by the Red Cross teams and there were 4 emergency medical transports.

Since yesterday (12th of august) the Red Cross has started with activities in the three reception centers Ranka Milanovic, Senic and Partenie Zografski where are accommodated 150 persons as well as other types of relief such as medicaments and therapy for the chronical diseases and vitamin therapy for the most vulnerable.

On 12th of August the Red Cross teams have delivered a truck with food and hygiene parcels for the flooded families in the Tetovo region in the villages Shipkovica and Brodec.

According the information from the field, Macedonian Red Cross is calling for donations of the following products: canned food, baby food and diapers, hygiene items and disinfection items, shovels, rubber boots, buckets, rubber gloves, towels diapers for grownups and plastic trash bags. The donations can be delivered in the Red Cross Warehouses in Momin Potok, Skopje 08-18.00 hours. (Contact phone: 3096 227).

Until now there were 22.101.994 MKD donated on the Solidarity fund Bank account

Until 12th of August there were 12.636.000 MKD donated through the mobile phone operators. (Next update will be on Monday)

We call in our donation activities for humanitarian support to be followed the instructions of the relevant institutions and the Macedonian Red Cross in order to have more efficient response with the consequences of the natural disaster.